PlanetScale and Vitess at KubeCon NA 2019

KubeCon + CloudNativeCon NA 2019 last month was the largest KubeCon conference to date with nearly 12,000 attendees from all around the world. The conference size reflected both the maturity level of Kubernetes as well as its burgeoning ecosystem.

PlanetScale celebrated two major achievements at KubeCon: Vitess's graduation from the CNCF incubation program and the general availability of PlanetScale CNDb, our cloud native database-as-a-service powered by Vitess. Be sure to check it out; it’s a great way to get started with Vitess!

Sugu Sougoumarane, our CTO and Co-Founder, had the opportunity to share the power of Vitess during the Keynote: “If you are moving to Kubernetes, don’t leave your data behind.” Watch the full keynote for insights into Vitess’s recent graduation from CNCF, case studies featuring companies large and small including Slack and JD.com, and Sugu's recommendations for how startups can get data management and storage right the first time.

In addition to Sugu, five other members of the PlanetScale team spoke at KubeCon this year. Check out their talks exploring the problems facing users of Vitess and its diverse range of applications, from stateless storage to migrating databases to geo-partitioning.

We were also excited to see three other talks share Vitess use cases:

In addition to these talks, we had some fun doing interviews. You can start by listening to Sugu talk all things Vitess on The Cube. Afterwards, you can listen to Jiten and Sugu share Vitess’s backstory, explaining why it’s such a good fit for Kubernetes on the Kubernetes Podcast.

When the team wasn’t on stage speaking, we had a great time connecting with conference attendees at our booth. We set up a database coding challenge, participated in a Passport program with Kasten and 4 other companies, and shared our Vitess and database knowledge with so many different people. We loved having the opportunity to chat with everyone!

And we couldn’t leave San Diego without doing some exploring. Next time you’re in San Diego recommend checking out Lucy’s Tacos for a quick refueling, Cafe21 for a post-conference Bloody Mary or grilled cheese, and be sure to make your way to The Noble Experiment, San Diego’s best hidden speakeasy! 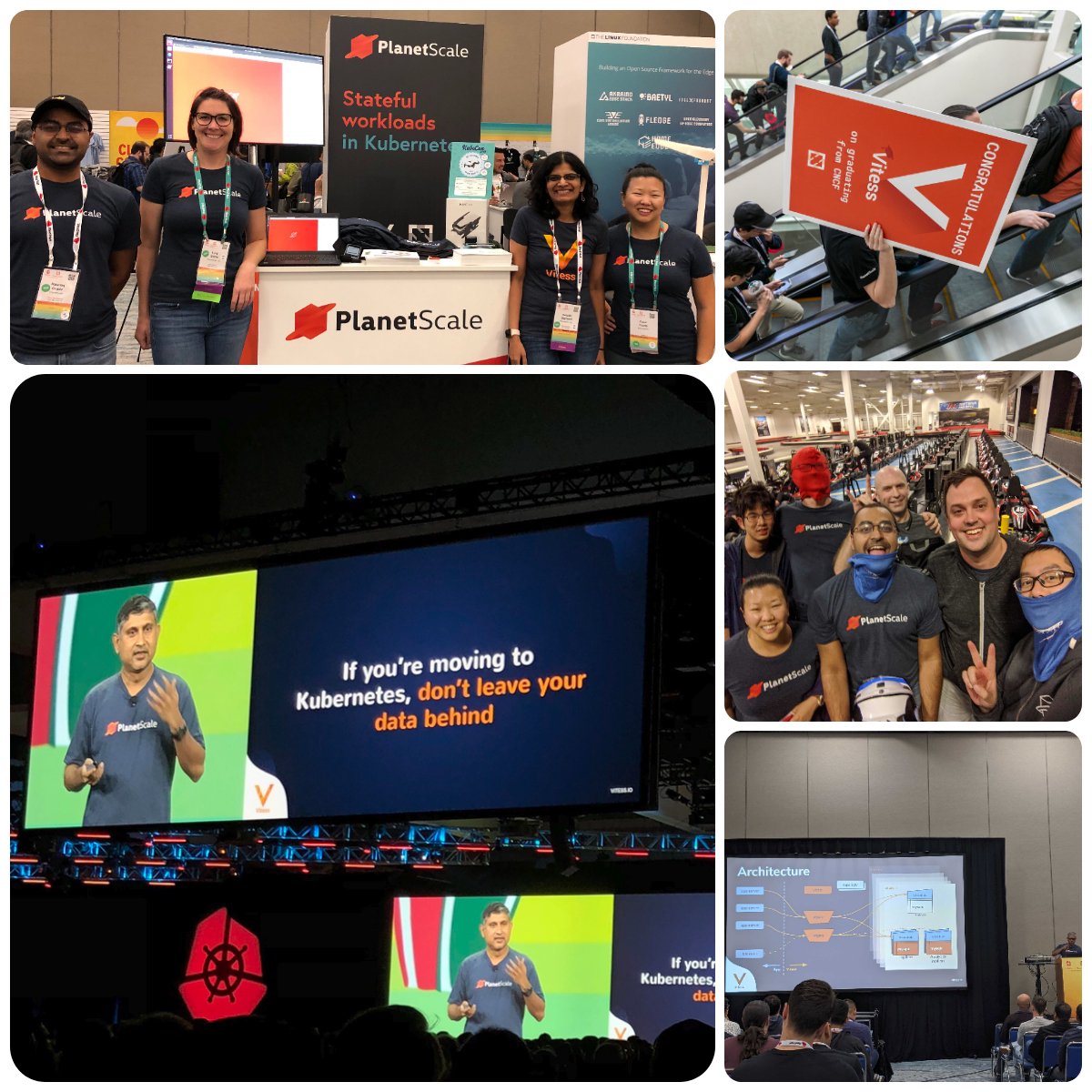 Couldn’t make it to KubeCon in San Diego? Catch us in Europe for FOSDEM in early February and KubeCon EU in late March.